“I called Michael Monroe and Andy McCoy from Hanoi Rocks, and we all disappeared into a strange, intense friendship bonded in death, drugs and self-destruction. Michael would sit around all day, combing his hair, putting his makeup on, taking his makeup off, and then putting it on again.

“You may really be a transvestite,” I told him one day after I went to look for him in the bathroom at the Rainbow, only to discover that he was using the ladies’ room.

“No, man,” he answered as he smeared foundation on his face. “I just like the way I look.”

“But that doesn’t mean you have to use the ladies’ room.”

“I always use the girls’ bathroom,” he told me, “because whenever I use the guys’ room, I get into a fight because someone calls me a fag for putting makeup on in the mirror.”

It’s an honor for me to be in the band together with Michael and Sami [Yaffa, bass] who were the brightest shining stars when I grew up, starting to play rock and roll music, AND bonus to that is also to share stage with Karl and Steve who are incredible players. So. I. Am. A. Happy. Fucking. Dregen!

So, I guess we have a new guitar player in the Michael Monroe band.  ;-) 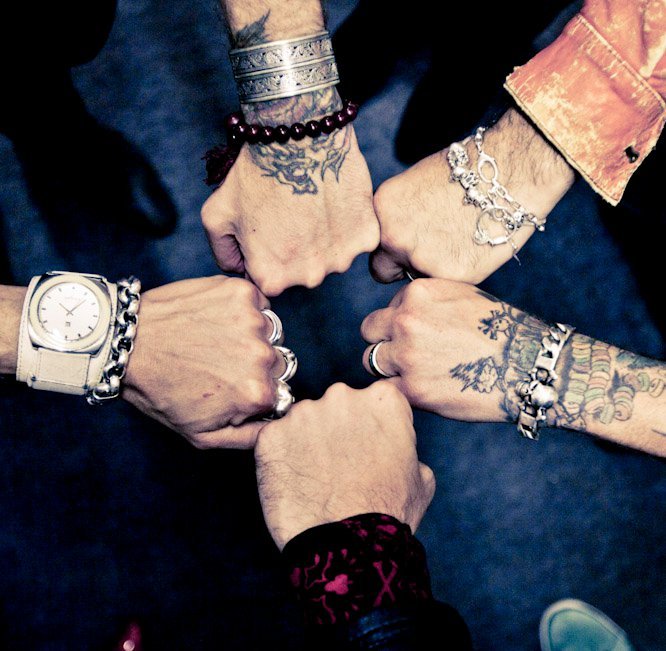 Tonight was the last show of Ginger with the Michael Monroe band. It was also Michael‘s birthday, so it promised to be a very special and emotional night. And it was, at least for me. The stage was at the Provinssirok Festival in Finland and the gig was beautifully live streamed by YLEX. (Thank you!!! I love the internet!!)

Ginger wore his scary face make up for the occasion, and he kicked ass!, as did the rest of the band, they are an awesome combo. I cried when they played “Boulevard of Broken Dreams”, I cried when Ginger started to sing “Happy Birthday” for Michael, I cried when the audience chanted “Ginger, Ginger“, I laughed when Ginger did “Blitzkrieg Bop”, and then I cried some more.

The anecdote of the night was when Michael snapped at some guy who tried to help him get up back on the stage and apparently touched him where he didn’t want to be touched: “Don’t you ever touch my ass!, without my permission. Thank you.”

I’m sad Ginger has left the band. Let it be a lesson about the impermanence of things. We have the songs, the shows and the memories.

I hope we don’t have to wait much longer to know who’s going to replace him, I’m starting to get cranky!

Great final show with the guys. Feels good to go out on a high note. Will miss these boys. @Gingernyc

Birthday decorations on the tourbus. Good fun! Many Thanks to everyone for their Birthday wishes to me – I do appreciate it! Tonight is gonna be a very special show at “Provinssi Rock” for several reasons. C u there! *Michael*